I bumped into Clara Louise Burnham, nee Root, while researching the Columbian Exposition. She wrote a novel of the Fair called Sweet Clover: A Romance of the White City. Clover is the lead character. The plot is just barely enough to hold the novel together, but, unlike the brief diaries, she describes the sights and sounds and smells and feelings of the Fair--and of the transformation of Hyde Park for the Fair.

Clara’s father was a composer most famous for “The Battle Cry of Freedom” and “Tramp, Tramp, Tramp, the Boys of Marching”, anthems of the Union Army in the Civil War. He moved the family to Hyde Park in 1858 and founded a successful music publishing business, which lost all its inventory in the 1871 fire and had to rebuild from bankruptcy.

During the rebuilding, Clara married a lawyer named Walter Burnham, who was apparently completely unremarkable—at least, to the newspapers. He died young. After that, Clara moved in with her father, spending summers with the family in their cottage on the coast of Maine. In her last years, she lived in the Cooper-Carleton (now the Del Prado). She started writing around 1880, possibly when Walter was ailing and the family was struggling.

She very successful. She published 26 novels, sold half a million copies, and had a national audience. Several of Burnham’s books were made into plays and movies. The movie version of Jewel came out in 1915 and was remade in 1923 as A Chapter of Her Life--directed by a woman, Lois Weber. Clara’s name appeared above the stars on the poster, so her fame lasted in her lifetime. She died in 1927 at the family cottage in Maine.

Burnham was a Christian Scientist and three of her novels took that as a theme: The Right Princess, Jewel, and The Leaven of Love. They were praised by Mary Baker Eddy, the founder of Christian Science, herself, who called her a “metaphysical surgeon.” Later, Eddy asked her to change the endings so the romantic couple didn’t marry and finally said that Christian Science couldn’t endorse fiction in any form. That had to have hurt.

I feel like a Women’s History Month of women in Hyde Park should include Rosalie Buckingham. She’s famous now from the BBC series about her husband—Harry Selfridge.

She was born in Chicago in 1860 and, though Chicago was small, the Buckinghams were already getting rich. Her grandfather built a grain elevator—and then signed a contract with the new Illinois Central Railway to be the exclusive grain elevator for all IC grain warehousing for the next 10 years. Even though Rosalie’s father died young, the family prospered. Rosalie studied music, traveled in Europe, and was Chicago high society. She was known to put on harp concerts for charity.

As she neared the age of 30 still unwed, Rosalie decided to become a property developer in the rapidly developing Hyde Park Township, which was still a separate suburb. In 1883, she bought two city blocks from 57th Street to 59th Street near the IC tracks and hired Solon S. Beman, who had just planned Pullman, to plan a development.

The plan was for 42 villas (villa = no rooms for live in servants) and smaller artists’ cottages. It included landscaping, a park, infrastructure development (sewer, paved street, sidewalks, lighting) and, on 57th Street, a three-story clubhouse on one corner and across the street an inn, café, and music hall with a business block with all the conveniences—drugstore, grocery store, reading room. The street was to be named Rosalie Court and the café was the Café Red Roses. She broke the pattern of naming things for herself when it came to the little park—that officially is Sylvia Court. Rosalie and her agents believed in marketing, putting out a brochure in 1884 “Rosalie Villas; or, How to Buy a Homestead.” There was a sequel brochure of photos called “A Holiday at Rosalie Villas” in 1889 that bragged that it was a model for development that beautified other cities.

The plans announced in an 1884 Tribune article called for ornamental granite and wrought iron arches on 57th and 59th as the proud owners entered the street, fountains in the park, and shade trees. A purchaser had “the employment of a capable consulting architect to insure a harmonious plan of building.” No rogue houses for Rosalie.

Beman drew up design standards, which is why the street has a similar feel, though it had several architects. The houses were set back the same distance, with a driveway next to each one, leading to a stable behind the house. A few of the lots were divided so no driveway and a few of the lots have attached houses. The idea was that these would be nice homes for the middle-class or get-away cottages for the well-heeled, conveniently right by the IC station, cooled by lake breezes (because the tracks were ground level), and far from the coal soot etc. of downtown Chicago. They could even commute on the cable car.

The houses sold quickly—and Rosalie was quickly out of the real estate business and ready for her next adventure--marrying Selfridge in 1890.

Grandpa’s grain elevator deal made another branch of the family wealthy as well. Kate Buckingham was one of Rosalie’s bridesmaids and Clarence was one of Harry Selfridge’s groomsmen. Ten years after Rosalie’s death of the Spanish Flu, Kate donated Buckingham Fountain in memory of Clarence. 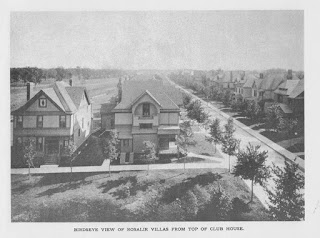 Trish
My Book in Progress: The Things They Left Unsaid: A Story of World War II I'm writing a book of discovery about all the things I didn't know about my mother and father, World War II, and how it transformed their lives. I'm writing the book I wanted to read, but couldn't find. It's a journey that's taken me a number of places. The Wordpress blog speaks of some of them. The Blogspot blog speaks to my interests in my neighborhood and its history, gardening, ecology, and urbanism. I have a Ph.D. from the University of Chicago--rhetoric, literary historiography, and American literature.